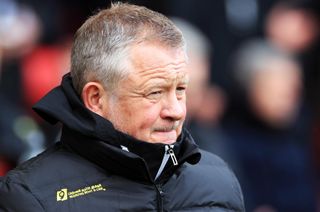 Sheffield United had to settle for a 1-1 draw against Brighton on their return to Premier League action as hopes of European football next season were dealt a minor reality check at Bramall Lane on Saturday.

The Blades had spent their winter break in Dubai, while their rivals had failed to stamp any authority on or make any notable headway in their absence in the race for the top four.

Chris Wilder’s team were on their way to matching Chelsea’s win against Tottenham earlier in the day when Enda Stevens blasted them in front. However, Neal Maupay, a summer transfer target for the Blades during the summer, quickly equalised.

It finished level despite a dominant second half showing from the hosts, with Brighton goalkeeper Mathew Ryan making a superb point blank save at the end to deny Oliver McBurnie.

The draw keeps the Blades in sixth place although they moved level on points with fifth-placed Spurs, both of whom are now four points adrift of Chelsea in the final Champions League spot.

However, fifth place might be enough to qualify for Europe’s biggest club competition if Manchester City’s two-year European ban for breaching Financial Fair Play is upheld by the Court of Arbitration for Sport.

The point edged Brighton further away from the bottom three but Graham Potter’s side remain without a Premier League win in seven matches.

Billy Sharp dragged an early volley wide as the Blades, with John Fleck and Stevens combining well down the left, started brightly.

Brighton weathered the early storm but just as it looked like they had settled and found a rhythm, they fell behind.

Fleck took a short corner and former Brighton midfielder Oliver Norwood curled a teasing cross into the penalty area, where it was flicked clear by Dan Burn. But only as far as Stevens at the far post and he took a touch to steady himself before drilling a left-foot shot into the top corner.

It is debatable whether seeing his team’s lead last just four minutes or the manner of Brighton’s equaliser would frustrate Wilder more.

Aaron Mooy pumped a long ball into the box from a free-kick near the half-way line, Adam Webster won the header and knocked the ball back into the danger area where Maupay stooped to head home from close range.

Lewis Dunk could have put Brighton ahead early in the second half but, when a loose ball dropped to him following a corner, the big defender blazed his effort over the crossbar from seven yards out.

The Blades came alive again as the hour mark approached. McBurnie’s poke goalwards was bravely smothered by Mathew Ryan after Jack O’Connell’s knockdown from a corner caused panic in the Brighton six-yard box.

Shortly afterwards, following a slick passing move from Wilder’s team, Fleck – who prior to kick-off signed a new contract until 2023 – flashed an effort narrowly wide from 20 yards.

Brighton were being penned back in their own half for lengthy periods as the hosts applied pressure, both methodically probing and bombarding the penalty area with crosses at times. However, captain Dunk marshalled a well-organised and stoic back line.

And when Brighton’s defence were caught out late on, Ryan produced a fine save to keep out McBurnie’s close-range effort, before George Baldock and Fleck were somehow denied in the ensuing goalmouth scramble.