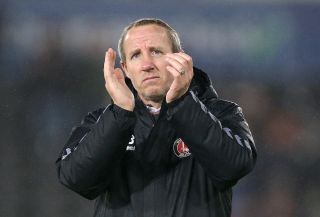 With the clock ticking down, Liam Palmer’s free-kick was flicked on by Tom Lees and Fletcher headed in from close range to earn his side a 1-0 win.

Bowyer said: “I’m disappointed, frustrated and angry. My players gave absolutely everything and they didn’t deserve not to come away with anything tonight.

“It wasn’t a foul for their goal. One hundred percent, it wasn’t a foul. I spoke to the ref and he said, ‘It’s because your player’s sandwiched him’. A six foot seven striker has got sandwiched.

“I’m sure it’s still a contact sport and there was minimal contact. He gave a foul and it was never a foul. It’s becoming a non-contact sport now. That’s the way it’s going, anyway.

“It’s wrong because we deserved to come away with a point. We’re in every game and we’ve just pushed Sheffield Wednesday, who are a very good side.

“We were causing problems. If we’d just taken care a bit more in the final third. I thought we did well at times.”

Wednesday started the game well and early on Fernando Forestieri tried a low shot from inside the box which Dillon Phillips pushed wide.

The hosts had a good chance towards the end of the first half when Kieran Lee headed from inside the six-yard box. Forestieri hit the side netting and then saw an effort deflected wide.

Substitute Fletcher then posed problems for the visitors, with a firm header superbly saved by the keeper.

Charlton went close to taking the lead against the run of play when Lyle Taylor’s long-range strike thumped against the bar.

Forestieri was involved again soon afterwards, trying a shot from distance which was well saved by Phillips.

He said: “Of course I’m very pleased. I think the main thing is that we deserved to win that game. We missed some glorious chances and thought it wasn’t going to go in.

“It’s very pleasing that in the last two games we’ve showed that spirit and mentality. Right to the very end we kept pushing and got what we deserved.

“That extra five percent that you need can often be the difference. We’ve received some really unfair criticism and we have to take that on the chin. We’ve come fighting back in these last two games.

“The attitude and the work-rate has been right back to what I expect and we’ve got the rewards for that tonight.

“I think it’s obvious how important Steven (Fletcher) is to us. Of course he makes a big difference and hopefully he can maintain his fitness and make sure he’s available for every game.”