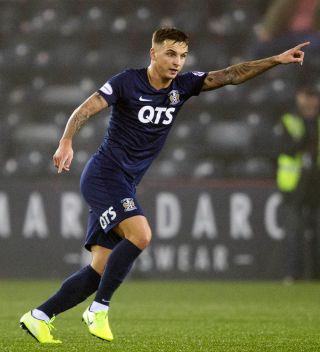 Eamonn Brophy admits the last two games have been a much-needed boost for him and his team-mates but he never let his slow start to the season get to him.

After scoring four goals in his first 25 games this season, Brophy has netted three in his last two as consecutive wins ended a run of seven straight defeats in the Ladbrokes Premiership.

The 23-year-old had hoped to build on a spectacular campaign which saw Killie finish third and him make his Scotland debut but he knows football does not always work like that.

And the former Hamilton forward is just keen to look forward and build on the momentum as Killie travel to Aberdeen in the fifth round of the William Hill Scottish Cup.

Speaking about their wins over Ross County and Hearts, Brophy said: “It’s boosted the whole place. It’s something we needed coming off a poor, poor run.

“It’s given the boys a lift again as you can imagine, so we go into the game confident.

“The first six months wasn’t ideal but it’s football. It’s a double-edged sword being a striker: when you are scoring goals and winning games you get the praise and when you’re not, you get the stick. That’s fine.

“But hopefully it can change. We have (Nicke) Kabamba in now and hopefully he can help me so I am looking forward to the games ahead.

“Last year I came off a high with the Scotland stuff and I was looking to hit the ground running. Obviously it didn’t work out like that but that has happened plenty of times in my career. You get ups and downs, football is full of it, and hopefully I can kick on now.

“It’s something I have learned to deal with and even when I’m not scoring goals, I don’t let it bother me too much because I know it’s football and I know what I’m capable of doing. You just keep believing in yourself.”