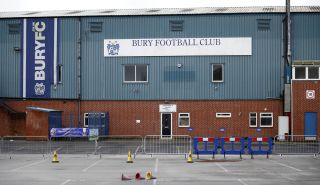 Bury have been given extra time to prevent their expulsion from the English Football League.

The EFL has set a new deadline of 5pm on Tuesday for owner Steve Dale to complete a sale after receiving information to consider a request for an extension to Friday’s original deadline.

The Shakers had been poised to be expelled from the EFL for failing to prove the Gigg Lane outfit’s financial viability.

But just minutes before the League One side were due to lose their Football League status on Friday evening, the EFL announced Dale had accepted an offer from C&N Sporting Risk.

An EFL statement issued on Saturday afternoon said: “The EFL board met this morning in regard to Bury FC.

“Shortly before Friday’s 11.59pm Notice of Withdrawal deadline, the EFL received notification that an offer for the club had been accepted and a request was submitted to extend for a further period in order to successfully conclude a sale.

“The board has fully considered the information that has been made available by C&N Sporting Risk and whilst no formal sale has been completed, despite reports to the contrary, enough credible information was presented to allow the board to agree to work exclusively with the club and C&N Sporting Risk over this bank holiday weekend in an attempt to finalise the change of control and achieve a positive outcome for Bury FC.

“The EFL board, however, remains firmly of the view that the League cannot be in a position whereby any more of the club’s 2019/20 fixtures will be suspended due to the integrity of the competition, the impact on other clubs in the League and therefore has stated that matters must be concluded by 5pm on Tuesday 27 August 2019.

“If in the event a successful outcome is not achieved by this point, then Bury FC’s share in the EFL will be withdrawn and its membership in the League will come to an end.”

Executive chair Debbie Jevans said: “The board has considered the evidence presented and has determined, in a final effort to allow the club the opportunity to survive, to grant an extension and work exclusively with the club and C&N Sporting Risk to see if a takeover is possible.

“No one wants to see a club lose its place in the League and we will now work with the potential purchasers over the weekend and ahead of the Tuesday deadline in an attempt to find the solutions required for a sale to take place.”