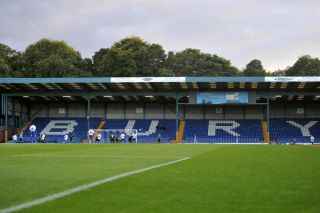 Bury MP James Frith is seeking a meeting with the English Football League to request that the town’s football club is reinstated to Sky Bet League Two next season under new ownership.

The Shakers were expelled from the Football League this week, losing their place in League One, after C&N Sporting Risk pulled out of a takeover.

Bury insist a £7million takeover bid by another party had been submitted prior to Tuesday’s second deadline and are considering legal action against the EFL for what they feel is the club’s unfair expulsion, while current owner Steve Dale released a statement on Friday calling for an independent report to be carried out and asking for a ballot of the EFL’s clubs to potentially reverse the decision.

As announced on #Sportsweek I am, with @AndyBurnhamGM seeking a meeting with Debbie Jevans to ask the EFL to reinstate Bury FC to League 2 next season, with new ownership. We will write to the remaining 71 clubs in the league asking for their support on this.— James Frith MP (@JamesFrith) September 1, 2019

Frith, with the support of Manchester mayor Andy Burnham, the former Secretary of State for Culture, Media and Sport, has requested a meeting with EFL executive chair Debbie Jevans to discuss the idea of Bury being allowed back into the bottom tier of the Football League once a new owner is in place and he plans to write to the remaining 71 clubs in the league asking for their support.

“I think what this illustrates is a huge sense of injustice about how things have been handled,” Frith told BBC Radio 5 Live’s Sportsweek programme.

“Time is important and the club should have been given more time, having been given begrudgingly a deadline of one working day.

“Steve Dale only accepted the one creditable bid and getting the information proved to be the hardest part. The owner, while committed to selling, was not engaging in any due diligence and the disconnect was very real.

“I have spoken with the person who made the bid and I believe them to be very creditable and they have proof of funds. They are a British businessman based in the north west.

“All this was communicated to the EFL and I spoke to Debbie Jevans about it and that is why myself and Andy Burnham want to meet with Debbie Jevans and ask for leniency to return to the Football League a division below where the club was.

“We are going to write to the remaining 71 clubs and ask for their support and ask for Bury to be returned to League Two from the 2020-21 season.

“I will be seeing to present a complete package to the EFL without the deafening noise of a ticking clock and apply to enter League Two next season.

“This has had a huge impact on our town and generations of football families but we have to move forward.”