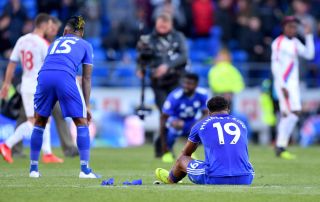 Cardiff were relegated from the Premier League as Crystal Palace’s away-day specialists won 3-2 in the Welsh capital.

Neil Warnock’s side needed to win their final two games to have a chance of overtaking Brighton, who enjoyed a four-point advantage and a far superior goal difference heading into the penultimate weekend.

But clinical Palace played the familiar role of executioners as Wilfried Zaha, Michy Batshuayi and Andros Townsend scored, with Cardiff replying through a Martin Kelly own goal and Bobby Reid’s stoppage-time strike.

Cardiff, as has so often been the case this season, were not short of commitment and energy, just a lack of quality, which has been their undoing this season.

Against opponents, who have incredibly won nine times on the road compared to four at Selhurst Park this season, they were brutally punished, with Zaha at his brilliant best.

Ironically Zaha, a former Bluebird loanee, was on the pitch the last time Cardiff were relegated from the top flight five years ago, alongside Aron Gunnarsson, who was playing his final home game for the club after eight years and over 280 games.

Cardiff owner Vincent Tan had made a rare visit to the Welsh capital and he saw his side come close to taking the lead within 40 seconds.

Josh Murphy’s drive from distance dipped devilishly to strike a post, but Cardiff’s momentum was slowed when the influential Victor Camarasa hobbled off after 10 minutes with what appeared to be a dead leg.

Palace began to stroke the ball around with confidence and Zaha fired into the side netting as he began to torment his marker Lee Peltier.

Cardiff failed to heed the warning as Zaha took Townsend’s return pass and planted a low shot into the bottom corner past goalkeeper Neil Etheridge.

It took the Palace winger into double figures for the season, with nine of his 10 league goals coming away from home.

Cardiff were level within three minutes when substitute Leandro Bacuna broke on to Reid’s pass and down the right to deliver a cross.

So often the case this season, Cardiff gave it a good go. But you felt the lack of quality was always going to end in relegation – and so it has proved.— Phil Blanche (@philblanche) May 4, 2019

It should not have a posed a problem to Palace, but the hapless Kelly diverted the ball into an empty net after the goalkeeper Vicente Guaita had gambled that the ball would reach him.

“Martin Kelly, he wants Brighton down,” sang the Palace fans mischievously, keen to see their great rivals rather than Cardiff go down.

It was a lifeline for Cardiff, but Zaha was intent on cutting the cord. Zaha and Luka Milivojevic combined well and Batshuayi drove home after he had played a clever one-two with Jordan Ayew.

Guaita saved from Bruno Ecuele Managa and Reid as Cardiff again responded well to falling behind, but Etheridge prevented Batshuayi’s point-blank header from extending the lead.

Murphy made a horrible mess of Nathaniel Mendez-Laing’s cross after the break and Kelly blocked another attempt from the winger as Cardiff pressed frantically.

Reid then slipped Kenneth Zohore clean through, but the substitute’s shot was kept out by Guaita.

Cardiff paid the price for those missed chances when Townsend drove from the halfway line, cut inside Joe Bennett and beat Etheridge from 20 yards via the near post.

Mendez-Laing provided further proof that it was not to be Cardiff’s day, or season for that matter, when he failed to beat James McArthur on the goal-line and saw Guaita push another effort on to the post.

Reid fired home a beauty at the death but Cardiff were down, as Palace added them to Hull, Stoke and Huddersfield as sides they have relegated in recent seasons.