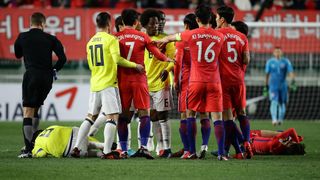 Colombia midfielder Edwin Cardona could face FIFA punishment after allegedly making a racist gesture during his country's 2-1 loss to South Korea on Friday.

The incident occurred in the 63rd minute as tempers flared between the two teams following a clash involving James Rodriguez and Kim Jin-su.

Cardona, who had come on as a substitute in Suwon, appeared to mock a group of Korean players by pulling the skin back to narrow his eyes as officials attempted to calm the situation.

Coach Jose Pekerman refused to be drawn on the potential ramifications for his player, insisting he did not witness the incident.

"I didn't see that gesture and I cannot comment on that," he told reporters.

"It was a physical game. Things happen during a game like this. I can't comment further on an incident that I didn't see with my own eyes."

Tottenham forward Son Heung-min scored both goals to give Korea coach Shin Tae-yong his first victory in charge of the national team, with Cristian Zapata netting a consolation for Colombia.

"I thought the Colombians played a physical, rough game today, but it can happen in football," Ki said.

"But racist behaviour is absolutely unacceptable. Colombia have world-class players, and I was extremely disappointed to see such action."