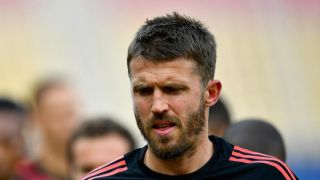 Michael Carrick will return to first-team duty at Manchester United but is set to retire from playing and become a coach at the end of the season, Jose Mourinho has confirmed.

Carrick has yet to feature in the Premier League this season, the former England international having undergone a procedure to resolve an irregular heart rhythm discovered in his only appearance of the campaign, against Burton Albion in the EFL Cup in September.

But the United captain took part in the club's recent warm-weather training camp in Dubai and Mourinho believes Carrick has a part to play on the pitch before accepting a coaching role at Old Trafford.

"So we are all happy and in the end of the season I expect him to join [the coaching staff], unless he changes his mind, but the club would be very happy for him to do that.

"I would be very happy also for him to do that. I think he will play again. After a few months without even training he is in his second week with the team. He can be a very important player for us."

United travel to Turf Moor to face Burnley on Saturday, with Mourinho's men seeking to extend a seven-match unbeaten Premier League run as they attempt to chase down rivals and runaway leaders Manchester City.