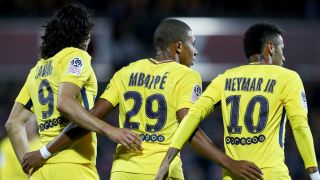 Edinson Cavani believes there is more to come from himself, Neymar and Kylian Mbappe, even as PSG's expensively assembled trio dominate in Ligue 1.

New signing Mbappe made a goalscoring debut, Cavani scored twice and Neymar also found the back of the net in PSG's 5-1 rout of 10-man Metz on Friday.

It was the first time Cavani, €222million recruit Neymar – who has scored four goals since his arrival from Barcelona – and Mbappe lined up together, helping PSG extend their winning start to the Ligue 1 season to five matches for the first time in their history.

And Cavani – with seven goals in five league matches so far – feels it can get even better for PSG and their three attacking stars.

"I think we played well this evening. We were good in every area of the pitch," Cavani told Canal +.

"Of course it's difficult with 10 against 11, but we deserve the win because we played well. I feel good, despite the trip to play for my country. I always want to play if I can and the coach chose to pick me this evening, which is good for me.

"I always give my best, it's positive for everyone, and we feel good on the pitch.

"Mbappe and Neymar are great players. We have a good understanding. I hope we'll continue to improve."