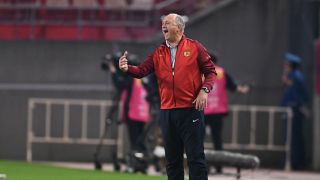 World Cup-winning coach Luiz Felipe Scolari hinted he has received an offer to replace Alan Pardew as West Brom manager and their impending relegation to the Championship will not put him off.

West Brom announced Pardew's exit "by mutual consent" on Monday, with the 56-year-old presiding over a disastrous run which has left them looking certainties for relegation.

Pardew was only in charge for four months after replacing Tony Pulis in November and a streak of eight successive Premier League defeats proved enough for the club's hierarchy to give him the boot, with West Brom 10 points adrift of safety six games from the end of the season.

And Scolari – a World Cup winner with Brazil in 2002 – hinted that West Brom have approached him, claiming a current Premier League club that may be in the second tier next term have made him an offer.

1 - Alan Pardew is the first manager in Premier League history to be sacked on Easter Monday. Unholy. April 2, 2018

"No, sorry, the second division [Championship]. I have offers and I try to understand what they want. This is my situation at the moment, because I say to my family; 'three months I stay Brazil – January, February, March.' In April, maybe I go outside [Brazil] again.

"And in the second division, if you have a project for two years, [that's] OK, if not then I stay outside.

"Maybe I accept, because I have offers in the United Arab Emirates and China – I need to think. But England is fantastic."

When asked if being in the Championship would be a problem, Scolari was quick to highlight that it is a strong league.

"No, it's not a problem if it's first or second division, because the second division in England is maybe the [level of] first divisions in 45 other countries," he said.

The 69-year-old was most recently employed by Guangzhou Evergrande, who he guided to three successive Chinese Super League titles, as well as the AFC Champions League in 2015.