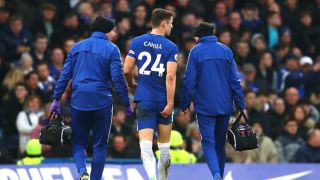 Gary Cahill was forced off in the first half of Chelsea's Premier League clash with Leicester City on Saturday due to a hamstring injury.

The England international pulled up after racing Jamie Vardy for a high ball over the Chelsea defence and hobbled off the pitch holding his right leg.

Conte turned to Andreas Christensen as his replacement, forcing David Luiz to wait even longer for his first Premier League appearance since November.

Cahill's injury will be a concern for the Blues with an FA Cup replay against Norwich City and the second leg of the EFL Cup semi-final against Arsenal to come this month, while a Champions League last-16 tie against Barcelona is on the horizon.