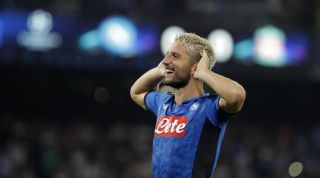 Chelsea were believed to be rebuffed in their first attempt to sign Mertens from Napoli, who are reluctant to lose the player.

But the Blues will submit another bid as they try and reinforce their attack before the transfer deadline tomorrow night, according to The Telegraph.

Frank Lampard is adamant that Chelsea can't rely on Tammy Abraham for all their goals and has challenged reserve striker Michy Batshuayi to show what he can do.

However, behind closed doors, Chelsea are working on bringing in a proven goalscorer to help relieve some of the pressure.

Their pursuit of Krzysztof Piatek was to no avail, with the AC Milan forward opting to move to Hertha Berlin.

PSG striker Edinson Cavani looked certain to join Atletico Madrid but the latest reports suggest the two clubs have failed to come to an agreement.

But Chelsea aren't giving up their search and Napoli are thought to be bracing themselves for one last assault for Mertens.

It's was reported that the Belgian could be signed for as little as £6m as his contract expires in the summer.

However, with Napoli playing hardball, Chelsea may end up having to pay over the odds to get their man.

Meanwhile, Olivier Giroud is rumoured to be in talks with Tottenham Hotspur over a shock move across London.

The former Arsenal man is believed to be open to the move as he is desperate for minutes ahead of Euro 2020.

Chelsea aren't opposed to letting Giroud leave but any sanctioning of the deal may depend on whether they bring a forward in.