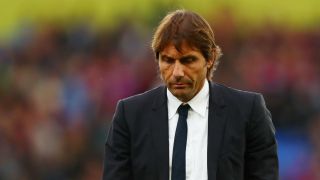 Antonio Conte conceded that Chelsea are struggling to cope with fighting on several fronts this season after they suffered a shock defeat to Crystal Palace on Saturday.

Chelsea won the Premier League title last season, as Conte enjoyed a brilliant debut campaign in England, but things are not going quite so smoothly this time around.

The champions have already lost three times in the league, with the defeat at Selhurst Park their second in a row and made even more remarkable by Palace's form going into the game.

Roy Hodgson's men had not picked up a point or even scored a goal, but their 2-1 win left Conte's men trailing pacesetters Manchester City by nine points after only eight games.

And the Italian accepts that Chelsea are not finding it easy to play domestically and in Europe, something they did not have to manage last season.

"We mustn't be happy," Conte told reporters. "This season will be very difficult for us.

"For this reason we have to put 150 per cent in; 100 per cent won't be enough. I have players with a great will to work and fight.

"For sure we have to find the strength to overcome this moment. Everyone can see our situation.

"I think every season is different. Last season is the past. Now it is another squad, different players and for this reason if we compare last season we didn't play Europa League or Champions League.

"This season we are facing four competitions and we are having a few problems doing this. When you have a few injuries, you are in trouble."

He added: "You know very well the potential of the other teams but it is important for us to look at ourselves.

"We must have patience this season to understand it won't be easy."

Michy Batshuayi started in the absence of Alvaro Morata and failed to impress, before reacting angrily to being withdrawn just after the break.

Conte insists he did not see Batshuayi's reaction, but said that such behaviour is to be expected if a player has a "bad performance".

"I trust in every player and try to give everyone the opportunity to take the chance. But also because we have Morata and then Batshuayi.

"The performance of the whole team was bad. Not one or two players."