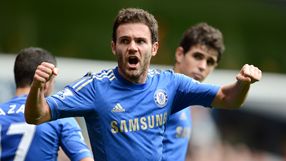 Spaniard Mata crushed former Chelsea manager Andre Villas-Boas's hopes of Premier League victory against the club that sacked him in March with a scintillating display at White Hart Lane, scoring twice in three minutes after the break to end a stirring Tottenham revival.

Rooney marked the 10th anniversary of his wonder-goal for Everton against Arsenal as a 16-year-old with an eventful afternoon at Old Trafford.

His own goal gave Stoke City a shock early lead but he made amends at the right end as a rampant United ran out 4-2 winners.

Unbeaten Chelsea have 22 points from eight games, four more than United and champions Manchester City who looked in deep trouble when they trailed 1-0 to Shane Long's goal at West Bromwich Albion having also had winger James Milner sent off.

Bosnian Dzeko then came off the bench to win it for Roberto Mancini's side - his second goal arriving in stoppage time.

Arsenal missed a chance to move into fourth place when they suffered their first defeat at Norwich City since 1984 - Grant Holt's goal sealing the first league win of the season for Chris Hughton's team.

The build-up to Chelsea's trip to Spurs was focused on skipper John Terry's four-game FA ban for racially insulting Queens Park Rangers defender Anton Ferdinand but it was his replacement Gary Cahill who set the ball rolling for his side.

Cahill struck a thunderous volley to put Chelsea ahead after 17 minutes, latching on to William Gallas's poor header.

Former Chelsea defender Gallas hit back by glancing in a close-range header two minutes after the interval before Jermain Defoe's opportunist strike put Tottenham 2-1 ahead.

Defoe's 200th career goal was a footnote to a great game, however, as Mata then took control.

Another poor clearance by Gallas fell to Mata in the 66th minute and he took a touch before burying a shot past Brad Friedel and three minutes later Eden Hazard's astute pass allowed the Spanish playmaker to beat the American goalkeeper again.

Mata also set up substitute Daniel Sturridge to cap an impressive display from pacesetters Chelsea who have achieved back-to-back away victories at Arsenal and Tottenham.

"It was only the 10 or 12 minutes early in the second half that Tottenham got back in the game. We lost a bit of control but for the rest of the game we took the initiative," Di Matteo told Sky Sports television.

"It was a test of our character today, coming here against a team in form who had four consecutive wins.