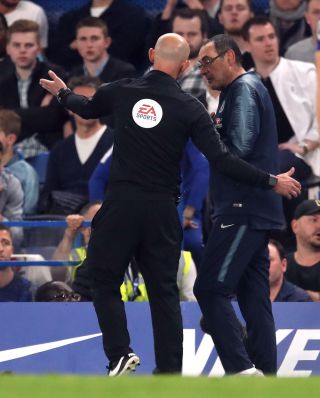 Head coach Sarri refused to talk to the media after Chelsea’s lacklustre home draw with the Clarets, incensed at being sent off and claiming he was abused by the visiting coaching team.

Chelsea defender Antonio Rudiger and Burnley goalkeeping coach Billy Mercer had to be separated by the officials at the final whistle, as a gripping encounter ended in ugly touchline scenes at Stamford Bridge.

David Luiz and Ashley Westwood then clashed as the teams left the field, and that after Gonzalo Higuain had thrown a bottle into the dugout in a petulant response to being replaced late on.

To make the night worse for Chelsea, England forward Callum Hudson-Odoi later confirmed on social media that he will miss the rest of the season with a ruptured Achilles tendon.

Asked if Chelsea will contact the FA over Sarri’s frustrations, Zola said: “I think there will be a follow (up) on that. Maurizio felt very unhappy.

“We understand it’s a football game. You say words because of the adrenaline, but he wasn’t particularly happy.

“If Maurizio said that, probably it’s something that could have been avoided.”

Explaining why he attended the press conference and not Sarri, Zola continued: “The reason is he’s very frustrated, so he’d prefer not to come over here.

“He’s been sent off. I think he’s been offended as well, so he didn’t feel it was the right thing to do, to speak to you.

“I know you wanted him, so I’m sorry. But you can understand: he’s frustrated at the game, frustrated at being sent off, and the other thing. He’d prefer not to come in.

“I think he’s been told something from their bench, but don’t ask me what; I don’t want to go down that line.

“We’ll see what we can do about that.

“It’s a football game, and it’s normal that there is a lot of passion in it.

“We felt very unhappy, and also that Maurizio has been sent off while he was just trying to tell our players to get in position.”

N’Golo Kante and Gonzalo Higuain blasted two goals in as many minutes for the Blues, but poor set-piece defending let Jeff Hendrick and Ashley Barnes plunder goals for the Clarets.

Zola expects Kante to recover quickly from a “contusion” to his ribs, but Hudson-Odoi’s season is at an end.

Really gutted to end my season with an Ruptured Achilles, gotta work hard and try and come back stronger for next season!!!😢🙏🏾❤️ pic.twitter.com/PXC53WszdH— Callum Hudson-Odoi (@Calteck10) April 22, 2019

“Really gutted to end my season with a ruptured Achilles, got to work hard and try to come back stronger for next season,” Hudson-Odoi posted on twitter.

Chelsea blew a big chance to stake a strong claim for Champions League qualification, leaving Zola admitting it was an opportunity missed.

“Certainly with three points it would have been a different story,” said Zola.

“We still gained a point on the other teams though, and we will not give up until the end.”

Burnley boss Sean Dyche played down the ugly touchline fracas at full-time, claiming: “I think it was handbags, manbags, bumbags; I’m not sure what you’re supposed to call it these days.

“I didn’t see it as I was clapping our fans. I don’t think anything of it.”

Dyche however insisted Burnley played no role in Sarri’s red card, adding: “It wasn’t anything to do with us why he got sent off.”