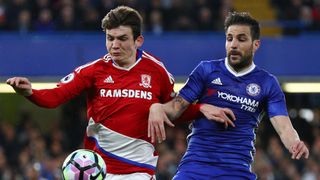 Fabregas reached the milestone in Chelsea's Premier League game against Middlesbrough on Monday, teeing up Nemanja Matic for the third goal at Stamford Bridge.

The midfielder lifted a clever ball over the Middlesbrough defence and found Matic, who took it down and fired through the legs of goalkeeper Brad Guzan.

Ryan Giggs and Wayne Rooney have both managed to reach 10 Premier League assists in five seasons, but former Arsenal starlet Fabregas now stands alone as one of the division's leading playmakers. The ex-Barcelona man also created the opener for Diego Costa, only for Cesar Azpilicueta to get the final touch before the Spain international striker broke the deadlock.

10 - has now assisted 10+ goals in six different Premier League seasons - more than any other player. Benevolent. May 8, 2017