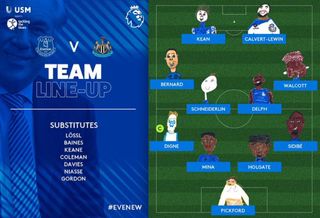 Schoolchildren’s drawings replaced the players on Everton’s team sheet for the club’s 2-2 draw against Newcastle.

And those images were then shown on stadium screens as well as Twitter, where they were exhibited on the team sheet as well as for goals and substitutions.

Drawing is one of many ways the students, who were also invited to the game, were taught they could explore their emotions.

Fabian Delph, Theo Walcott, Seamus Coleman and Jonas Lossl all joined the students for a drawing session and answered questions on topics such as acceptance, self-esteem, diversity and respect.

Everton led 2-0 in the Premier League game at Goodison Park but were undone by two late goals from Magpies substitute Florian Lejeune.