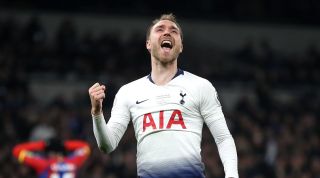 Real Madrid have been linked with a move for the Denmark international in recent weeks, but the Red Devils are now ready to fight los Blancos for his signature.

Eriksen’s contract expires in summer 2020 and Tottenham have not yet been able to convince him to sign fresh terms.

That has prompted Madrid and United to consider bidding for the former Ajax schemer, particularly as Spurs are unwilling to let him see out the final year of his deal in north London.

Tottenham chairman Daniel Levy, who would prefer to sell Eriksen to Madrid rather than a Premier League arrival, is reportedly holding out for at least £60m.

The 27-year-old would apparently be open to a move to Old Trafford, which could be his most likely destination if Madrid succeed in signing United midfielder Paul Pogba.