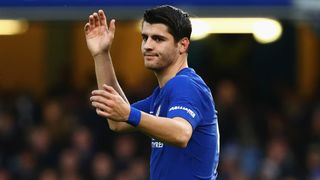 Chelsea head coach Antonio Conte has challenged Alvaro Morata to work hard to improve in the wake of his poor performance against Arsenal.

The striker missed three one-on-one chances in a thrilling 2-2 draw at the Emirates Stadium, the last of which came after Hector Bellerin fired home the Gunners' equaliser in the 92nd minute.

Morata has scored 10 goals in 19 Premier League appearances this season but the majority of those came in the opening three months, with the 25-year-old having only netted twice in his last eight top-flight matches.

Conte feels the Spaniard has been short on luck in recent weeks but admits his side had plenty of chances to take all three points from Wednesday's match.

"I think it's a pity because when you have a lot of chances to score, you must win the game. Instead, we're talking about a good draw against a good team," he told Sky Sports.

Asked about Morata's misses, Conte said: "He is not lucky in this period. He has to continue to work and improve. It's a pity because he had many chances to score but, at the same time, I'm very happy for his effort and commitment.

"We must be disappointed, me and the players. We had a good chance to win because we deserved to win.

"But this is football and we must accept the final result and continue to work really hard to try to score more.

"My disappointment is the same as my players. We win together, we draw together, we lose together. I repeat, it's a pity because we deserved to win the game."

The draw means Chelsea stay third in the table, a point behind second-placed Manchester United and 16 adrift of leaders Manchester City.