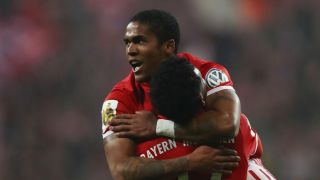 Douglas Costa has been warned not to publicly agitate over his future at Bayern Munich by club president Uli Hoeness.

Brazil international Costa caused consternation in Munich following an interview in Bild Am Sonntag, where he claimed to be undecided over his next move amid interest from unnamed Premier League, LaLiga, Ligue 1 and Chinese Super League clubs.

The 26-year-old scored the winner in Tuesday's 1-0 DFB-Pokal triumph over Wolfsburg, but has been restricted to eight Bundesliga starts in a season when fellow wide attackers Arjen Robben and Franck Ribery have signed new contracts.

Hoeness believes securing improved terms is Costa's own motivation and insists taking such grievances public is not the way Bayern do business.

The former Germany international told TZ he felt the player's actions were: "A desperate attempt to get a higher salary."

He added: "That doesn't work with us. He can try 10 more times. He is certainly not a social event."

Bayern head coach Carlo Ancelotti said in the build-up to the Wolfsburg game that he believes Costa is happy at the club and attributed the Bild Am Sonntag interview as primarily representing the motives of the former Shakhtar Donetsk man's agent.