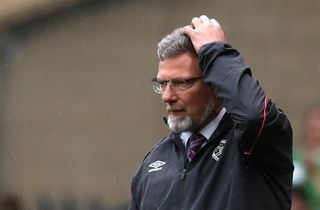 Craig Levein has been sacked as Hearts manager.

The club announced Levein would not return to his previous position as director of football and had stepped down from the club’s board, although he will stay on in a lesser role until the end of the season.

Club Statement: Craig Levein has been relieved of his duties as first-team manager— Heart of Midlothian FC (@JamTarts) October 31, 2019

A club statement issued on Thursday read: “The board of directors of Heart of Midlothian Football Club has today taken the decision to relieve Craig Levein of his first-team managerial duties.”

Assistant manager Austin MacPhee will take charge ahead as Hearts prepare to face Rangers in the Betfred Cup semi-finals on Sunday.

The statement continued: “Craig will not return to his previous director of football role and, that being so, will step down from the board.

“He will, however, see out his contract, which runs until the end of the season, working closely with the executive management team in continuing to develop and improve the structure of the backroom and youth operations within the development.

“We are confident that his knowledge and experience will contribute massively to ensuring that, come the end of the season, he will leave the football department in a healthy and thriving state.

“Effective immediately, Austin MacPhee will be in charge of first-team affairs, on an interim basis, while the board begins the process of recruiting a new manager. The new manager, and indeed the interim manager, will report directly to the chief executive.”