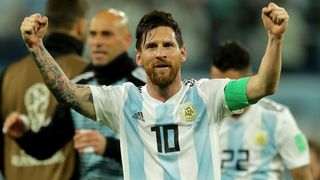 Hernan Crespo believes it is only logical that Argentina depend on Lionel Messi and said Barcelona do likewise.

Messi, 31, has come under fire for his performances in Russia, where his classy opener against Nigeria helped Jorge Sampaoli's men into the last 16.

Argentina have been criticised for their reliance on Messi, although it was Marcos Rojo who scored a late winner against Nigeria Tuesday.

But Crespo – who scored 35 goals in 64 games for Argentina – said the dependance made complete sense.

"It is logic that having the best player in the world makes you dependant on him," he said.

"Barcelona also depend on Messi. It also happens with Cristiano Ronaldo in Portugal and Real Madrid. It is normal and logical to be dependant on such great players.

Despite the criticism of Argentina, Sampaoli's side moved into a last-16 clash with France Saturday.

Crespo hopes the win over Nigeria was the release of pressure his nation's players needed.

"It is a liberation for all the players. What happened is not normal," he said.

"After the match that gave them the qualification to the last 16, you see many players crying after it. That means they were coping with enormous pressure.

"Somehow, I hope this victory releases them and they can find their best version for the next match."