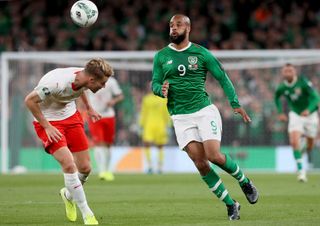 David McGoldrick and Callum Robinson are out of the Republic of Ireland’s friendly with Bulgaria on Tuesday night after withdrawing from the squad through injury.

McGoldrick, who scored his first senior international goal against Switzerland on Thursday evening to secure a potentially vital 1-1 Euro 2020 qualifier draw, did so having reported for duty carrying a shoulder problem.

Sheffield United team-mate Robinson limped off with a hamstring strain during the second half of the game and both have headed back to their club for treatment.

Manager Mick McCarthy said: “Both David and Callum won’t be coming back in when the squad report back to the Castleknock Hotel on Sunday.

“David came into camp with a shoulder injury, but was determined to play against Switzerland and what a game he had.

“He was brilliant from start to finish and capped off a great performance with a first Ireland goal that was no more than he deserved.

“Callum felt his hamstring in the second half of the game, so it is best now that he also goes back to Sheffield United for treatment.

“There are a few other bumps and bruises about the place but we will see how everyone feels after their short break over the weekend and take it from there on Sunday.”

Those players who started the Switzerland game underwent a pool recovery session on Friday morning while the remainder of the squad trained at Abbotstown, and they have all been released until Sunday lunchtime.

They did so with McCarthy still revelling in the atmosphere which greeted McGoldrick’s 85th-minute equaliser at the Aviva Stadium and reminded him of past glories.

He said: “I said after the game that it was like the Lansdowne Road of old on Thursday night and so many have agreed with that.

“I was told before the match that it was 18 years this week since the famous Jason McAteer goal against Holland, and the atmosphere against Switzerland was so similar to that day.

“The tone was set by the fans from the start and the place was rocking. They got behind us when Switzerland scored and then they took the roof off when David scored. It was very, very special, so thank you to them all.”

McCarthy was due to watch the Under-21s in European Championship qualifier action against Armenia on Friday evening before monitoring Group D rivals Denmark’s trip to Georgia, where Ireland head next month, and Switzerland’s home clash with Gibraltar on television 24 hours later.

He said: “The Tbilisi game between Georgia and Denmark will tell us a lot. We go to Georgia next, so we’ll be keeping a close eye on how that one goes. The group is tight and everything counts from here on in.”