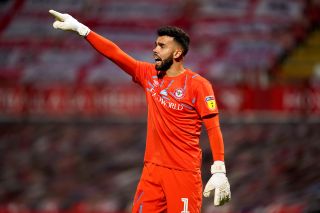 Brentford goalkeeper David Raya believes the Bees have already proven their Premier League credentials ahead of their promotion showdown with Fulham.

They beat Swansea 3-2 on aggregate in their semi-final having finished third in the table, missing out on automatic promotion by two points.

Brentford signed off from Griffin Park on Tuesday, ahead of the move to their new 17,250 capacity stadium less than a mile away, and Raya feels the club is ready to make the next step.

“We’re capable of being in the Premier League, we have shown it the whole season. We have a good group, a good team and play good football,” he told the PA news agency.

“It’s a massive opportunity for us and we deserve to be in the final after the lockdown and how we won eight in a row, seven after coming back from the break.

“We were two points from automatic promotion and we can fight to get into the Premier League and then have a good go.

We say bye to Griffin Park. Only been at GP as a local for a year but it’s been incredible. The atmosphere throughout has been always unbelievable 1/2 pic.twitter.com/ZKxO5JvIop— David Raya Martin (@daviidraya1) July 30, 2020

“I think we are able to go into the Premier League and achieve things but the important one is on Tuesday.”

Brentford had lost three straight games before Tuesday’s 3-1 second-leg win over the Swans, which sent them to Wembley.

A 1-0 defeat at Stoke before a 2-1 loss to Barnsley on the final day denied them an automatic promotion spot as West Brom stumbled over the line having failed to win any of their last four games.

But Raya insisted the squad have forgotten the disappointment of missing out and moved on.

“We learned from the Stoke and Barnsley games, we learned for the first leg against Swansea and then on Tuesday,” said the 24-year-old, who saved Andre Ayew’s penalty in their 1-0 first leg defeat to the Swans.

“We have to play like we did on Tuesday. We were brave, we were dominating the whole game.

“It was obviously against a very good side in Swansea who are going to have their spells but we defended well. We have to learn from those games.

“When West Brom lost against Huddersfield on the Friday before we played at Stoke we said it was an opportunity to take over. It didn’t happen but Stoke stopped us playing the way we had been.

“We went on an eight-game winning streak and in any league that’s really difficult. It always has to end and it was frustrating and disappointing to miss the chance but that’s the past.”