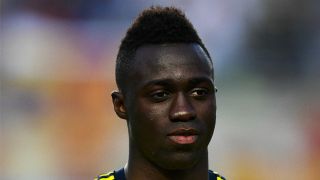 Ajax chief executive Edwin van der Sar believes Davinson Sanchez should have stayed with the Eredivisie club rather than becoming Tottenham's most expensive ever player.

Although Ajax received an initial €40million before potential further add-ons for the Colombia centre-back, Van der Sar insists the 21-year-old's immediate future should have been in Amsterdam.

Sanchez faces a battle for game time at Spurs, who had the best defensive record in the Premier League last season thanks to their strong centre-back pairing of Belgium internationals Jan Vertonghen and Toby Alderweireld.

After spending a single season with Ajax after leaving Atletico Nacional in his homeland, Van der Sar thinks it was too soon for the defender, who made his Spurs debut as a stoppage-time substitute in a 1-1 draw with Burnley at Wembley, to consider a move away from the Eredivisie.

"I think with Sanchez, one year was too early, he should have stayed two or three years," the Dutchman told a Soccerex event on Wednesday.

"But sometimes, with the financial power that is looming over us in the bigger leagues, it’s quite difficult for even a big club like Ajax coming from a small league to resist certain transfers."

We are delighted to announce that has completed his move to the Club subject to receipt of his work permit later this week. August 23, 2017

"I’d rather not [have to] replace them because I want to have as good a team as possible," Van der Sar said.

"But we know at a certain point that this league is not strong enough, so after a few years, hopefully if you play three, four or five years for the club and give us two or three championships and success in Europe then, [in an] ideal world, it is the right step to go forward."