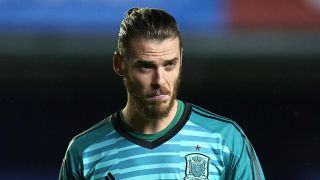 Spain goalkeeper David de Gea has the support of his team-mates and will bounce back from his error against Portugal, according to Carlos Marchena.

The Manchester United shot-stopper has made errors in two of his nation's past three games in a worrying run of form.

But Marchena backed De Gea, saying the 27-year-old had the character to respond.

"As the master Luis Aragones said, De Gea has a broad back," the assistant coach said.

"These accidents can happen, but he has all the confidence of the group and the coach [Fernando Hierro].

"David is well and prepared for what is coming."

Spain are next in action with a clash against Group B leaders Iran on Wednesday.