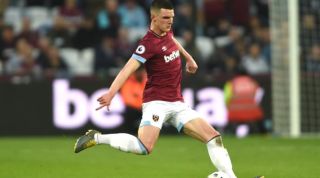 Declan Rice continues to get linked with a move to Old Trafford, but he's brushed off the rumours this week.

Speaking to the Daily Mail, Rice said: "I signed a five-year contract with West Ham last year, which will keep me at club till I'm 24, and for me this is the best place to be right now.

"I'm improving every week and although I see all this speculation, I don't really think about it too much.

"It's all talk until something happens - and nothing has - so I'm just focused on West Ham, doing my best and making fans happy."

Rice's star has continued to rise this year after a breakthrough season last year, starting this campaign well and helping West Ham to 8th after eight games.

And while it's no secret that Manchester United were interested in the midfielder last summer, it's maybe Chelsea who should be feeling aggrieved at not having him in their starting lineup: the Blues released him when he was 14.

Speaking to the Guardian, Rice revealed that he doesn't know why he didn't make the grade at Stamford Bridge. He said: “The only explanation I can think of is that I was going through a huge growth spurt at the time.

“I felt I was still playing good football but suddenly I wasn’t moving in the right way. I was all over the place, like Bambi on ice.

"I don’t know for certain if that was why they let me go but Chelsea was 10 minutes from where I lived and had been all I knew from the age of eight.”

In the same interview, it's a former Manchester United manager who Rice credits with helping him adjust to life as a professional, talking about a brutal dressing down David Moyes gave him after a mistake against Arsenal led to a goal.

“Moyesy was right to hammer me," said Rice. "I remember the game well. It was 1-1 and I ducked under a ball that ended up in the back of the net.

"It was probably my fourth start or something and he absolutely grilled me in front of the lads. I just sat there and took it. It hurt but I needed to be told."

There is a problem with Gary Neville's analysis of Man United