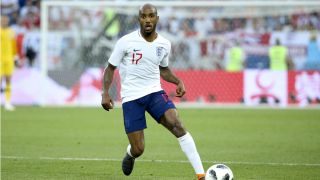 Fabian Delph has flown back out to rejoin the rest of the England squad at the World Cup following the birth of his third child.

The Manchester City midfielder returned home from Russia to be with wife Natalie straight after the 1-0 loss to Group G rivals Belgium, meaning he missed Tuesday's dramatic last-16 tie with Colombia.

England will face Sweden in the quarter-finals following their 4-3 shoot-out success, with Eric Dier converting the winning penalty in Moscow.

Alongside an Instagram picture of him sat on a jet, Delph wrote: ''I’ve just experienced the most amazing 24 hours.

"Watching my brothers come through a tough game both mentally and physically, I kicked every ball and felt every bit of emotion with the players, staff and fans.

''At 07:52, Me, my wife and two beautiful daughters welcomed there [sic] baby sister into the world. I can't put into words the happiness and gratitude I’m feeling ... Back to Russia now.''