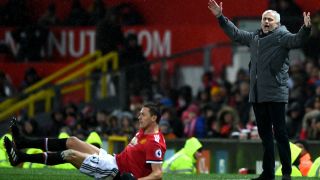 Nemanja Matic believes Jose Mourinho's "special" aura is retained by his relentless will to win after a difficult week for the Manchester United manager.

Mourinho's side were dumped out of the Champions League last 16 by Sevilla on Tuesday, putting in a meek performance which led many to question the Portuguese's selection and tactics.

Things improved on Saturday as United advanced to the FA Cup semi-finals by seeing off Brighton and Hove Albion, but Mourinho was scathing in his assessment of that showing and accused his team of being "scared" to play.

Only Matic was singled out for praise, described as "an island of personality" against the Seagulls and the Serbian, having won the Premier League title with Mourinho at Chelsea, is only too aware of his exacting standards.

Goals from Lukaku and Matic mean the Reds go marching on to Wembley Watch the goals here  March 18, 2018

"He's special because he wants to win, always," Matic said. "You can see when we lose a game he cannot accept that. Probably that's why he won more than 20 trophies in his life.

"It's very difficult to work with him, because he always wants more and more.

"Even if you win the league, he wants to win again next season. He's like this and the players need to be ready for that. I like it when the manager always wants better and better, so you have to improve always, always do your best. I like this kind of work, this kind of relationship.

"At this high level at Manchester United, and where I used to play at Chelsea, the players need to be ready for that because the pressure is big.

"Everyone expects you to win every game. Obviously it's not possible, but supporters always expect. It doesn't matter if you're tired or not, supporters want high quality football. It's normal."

Mourinho has been critical of his players - with the likes of Luke Shaw in particular coming under fire - and Matic was hesitant to confirm that only those with a certain mental strength can flourish under the Portuguese.

"I think this is a question for him," he said. "I'm doing my best and I'm happy to work with him, I'm happy to be part of his team, this club. I think he respects what I'm doing every day, not only in the game, but in the training sessions and I'm happy for that and I'll continue like this."

have been drawn against Tottenham Hotspur in the semi-final. The tie will be played the weekend of 21/22 April. March 18, 2018

United's sole hope of silverware this season comes in the form of the FA Cup, in which they will take on Tottenham in the last four for a chance to play Southampton or Chelsea in the final.

"In the Premier League you have six or seven teams who want to win the league, so it's not possible to always win," added Matic, with Manchester City enjoying a 16-point lead in England's top flight.

"But if we win the FA Cup it's good, but not perfect. You have four competitions in the season - if you win one, for me, it's not enough, but you always have to do your best.

"In the Premier League, when you're in the first four, it's not perfect, but it's good to play for the Champions League next season. If you win the FA Cup, I cannot say it's a successful season, but it's a good season."