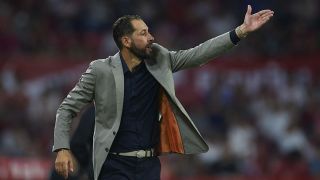 Sevilla could not reclaim top spot in LaLiga despite a second-half rally to earn a 1-1 draw at high-flying Deportivo Alaves.

Pablo Machin's men began Sunday at the summit, but they were knocked off their perch by Barcelona's win against Villarreal and looked destined for a further setback as Jony fired Alaves in front at Mendizorroza.

Alaves, who could themselves have climbed to third with victory, retreated into their shells in the second half and Wissam Ben Yedder pounced to claim a share of the spoils, leaving Sevilla a point behind last season's champions Barca.

A quiet opening half-hour was followed by a flurry of action as Ruben Duarte's dipping shot almost crept beyond Tomas Vaclik at one end, before Ben Yedder prodded agonisingly wide at the other.

And Alaves led in the 37th minute when Sergi Gomez's clumsy header played Jonathan Calleri onside to drill in a low cross from which Jony smashed high into the net.

The shaky Vaclik continued to invite Alaves pressure, but Quincy Promes could have levelled for Sevilla when a poor touch forced him wide before he clipped a right-footed finish past the post.

Fernando Pacheco bravely blocked from Franco Vazquez, yet he was caught out by Ben Yedder with 12 minutes remaining as the forward decisively touched Pablo Sarabia's cross past the goalkeeper.

Alaves went back on the offensive in search of a late winner and came agonisingly close, but Darko Brasanac nodded against the upright with Vaclik stranded.

WISSAAAAAAAAAAAAAAAAMOur French striker meets 's inviting cross and nips in to flick it over the 'keeper!!!! 1-1 (78')December 2, 2018