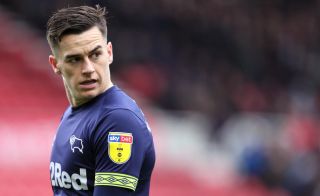 Derby midfielder Tom Lawrence has apologised to the club for “a total error of judgement” following last month’s “alcohol-related incident”.

The Welshman and Rams forward Mason Bennett were charged with drink-driving after a crash in Derby’s Allestree area on September 24 – a collision in which club captain Richard Keogh suffered a serious leg injury.

Both Lawrence and Bennett were fined the equivalent of six weeks’ ages – the maximum contractual limit – by Derby.

Lawrence said in a statement on Derby’s website: “Following the events of the evening of the 24th September I wish to offer my sincere apologies to the football club; our chairman, the manager, my team-mates and all our supporters for my indiscretions that night.

“It was a total error of judgement on my part, out of character for me and I am deeply disappointed in my behaviour and upset for my team-mate and our captain Richard Keogh.”