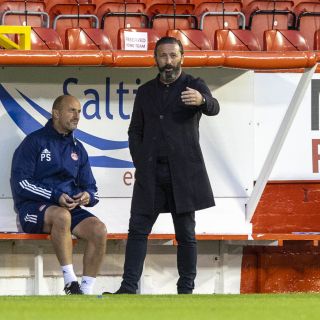 Aberdeen manager Derek McInnes believes his young players will reap the benefits of their performance against Sporting Lisbon.

McInnes told Red TV:  “We had an experienced back line along with Joe (Lewis) to keep making good decisions but ahead of that we had young Ryan Hedges, young Fergie, Ross McCrorie.

“Dylan (McGeouch) was a good voice in there organising and filling a lot of holes in front of the back lot.

“Then we brought on young Scotty, Connor and Ryan to try and get something towards the end.

“The players will remember that and you have got to remember there were a lot of youngsters there who will reap the benefit of playing against that type of opponent.”

McInnes was proud of their display and just frustrated they could not cancel out Sporting’s early opener.

However, he hopes his side take confidence into their Scottish Premiership campaign with a trip to Dingwall to come on Sunday.

“They knew they were in a game, there is no doubt about it,” he said.

“We have put ourselves up against a good side and more than held our own so we take that domestically now.

“We understand we want to keep getting back to this stage and keep getting these types of experiences, and hopefully finding ways to win against this kind of opponent.

“But domestically we get back to Ross County on Sunday and see how everybody shapes up for that in terms of fitness, legs and energy to go and compete with them.”