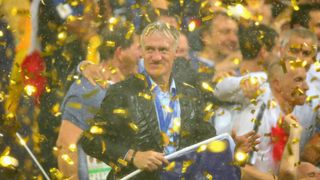 France's World Cup celebrations knew no boundaries in Moscow, as Paul Pogba and company gatecrashed Didier Deschamps' news conference to shower the coach - and members of the media - with champagne.

Deschamps' 2018 vintage produced another solid display on Sunday, bottling up Croatia to win 4-2 before lifting the trophy in the pouring rain.

Kylian Mbappe and Paul Pogba scored corkers for Les Bleus, both fizzing in shots from outside the area, while Antoine Griezmann's name will be toasted back in his homeland after he converted a first-half penalty.

After celebrating on the pitch in the sudden deluge, Deschamps was surely somewhat relieved to get himself inside for his post-match addressing of the international media, giving him the opportunity to dry off a little.

Yet before he could even answer the first question, 13 members of his squad popped into the room singing Deschamps' name and spraying champagne all over him and the gathered reporters.

After about a minute, the players - with Pogba among the group - seemed to disappear back into the bowels of the stadium.

However, six of them emerged once again for a second session, hugging Deschamps and dancing on the table.

"They're completely crazy those lads," Deschamps said once they had finally left the scene for good. "Sorry, they're young and happy."

Still, Deschamps will have plenty of time to raise a glass to his squad after they secured France's second World Cup, following on from their previous triumph in 1998.