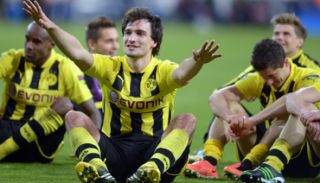 Dortmund had looked assured for most of the match against Real Madrid at the Bernabeu, but two late goals set up a frantic finale as the Germans clung on for a 4-3 aggregate win that put them in the final for the first time since 1997.

A sensational 4-1 first leg home victory, where coveted striker Robert Lewandowski found the net four times, set the foundations for their trip to Wembley on May 25 but Real's stirring fightback made it uncomfortable viewing for some in the Dortmund camp.

"I guess we can only do drama," said club boss Hans-Joachim Watzke, who has been responsible for Dortmund's financial renaissance after the club appeared on the brink of collapse in 2005.

"It was the first time I had to stop watching due to heart problems. I spent the last 20 minutes locked in the toilet, covered my ears and looked at my watch. All kinds of thoughts passed through my head," he added.

Dortmund staged an even more dramatic finale in the quarter-final against Malaga, scoring twice in stoppage time to snatch a stunning 3-2 aggregate win.

"I thought about doing it [copying Watzke] as well a couple of times," coach Jurgen Klopp said when asked to describe the final minutes of the game.

"We made it very tight in the end but as you saw, Borussia Dortmund happen to be an all-inclusive team," he added in reference to his team's ability to ensure dramatic endings.

"This game had everything. But if you want to reach a Champions League final you also have to do everything."

Dortmund, on the brink of bankruptcy nine years ago, have bounced back in style with the Ruhr Valley club winning back-to-back domestic titles from 2011 before launching their assault on Europe.

While Dortmund are undoubtedly the surprise team of the season, their rise cannot be considered a classic rags-to-riches Cinderella story.

It is rather the story of a club's eager attempt to return to the very top of European football, a position they last occupied in 1997.

What sets the Germans apart from other great teams that have overcome adversity is the speed in which they could complete the recovery.

For Dortmund, Tuesday's qualification completed a trip from mid-table mediocrity in the Bundesliga to a Champions League final within three seasons.

On a financial level, reaching the final is expected to swell Dortmund profits to record levels and help break the 250 million euro turnover mark for the 2012/13 season.

When newly crowned Bundesliga champions Bayern Munich beat Dortmund in the German Cup quarter-finals earlier this year, Bayern president Uli Hoeness was quick to point out the power struggle between the two sides had tipped back in favour of the Bavarians.

After two dominant Dortmund seasons, Bayern were back on top but what Hoeness had completely failed to acknowledge was Dortmund's battling qualities in Europe.

Hoeness' words could come back to haunt him at the end of the month with Bayern, taking a 4-0 first leg lead to Barcelona on Wednesday