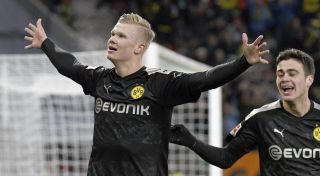 Erling Haaland came off the bench to score a hat-trick on his Borussia Dortmund debut and inspire a 5-3 comeback win at Augsburg.

Dortmund were 3-1 down before Haaland came on and struck three times in the second half.

Jadon Sancho pulled Dortmund level at 3-3 after Haaland, who joined from RB Salzburg this month, got his first and the forward pounced twice more to wrap up the victory.

Florian Niederlechner gave the hosts the lead and Marco Richter made it 2-0 before Julian Brandt pulled a goal back.

Niederlechner restored Augsburg’s two-goal advantage before Dortmund and Haaland’s stunning second half but they remain seven points behind Bundesliga leaders RB Leipzig after their 3-1 win over Union Berlin.

Timo Werner’s second-half double kept the pacesetters on track but they were forced to come from behind.

Marius Bulter gave the visitors a first-half lead but Werner levelled after the break before Marcel Sabitzer put Leipzig ahead and Werner grabbed a second with seven minutes left.

Werder Bremen won the the battle at the bottom at Fortuna Dusseldorf.

They climbed out of the bottom two with a 2-1 win, going above Dusseldorf in the process.

Koln beat Wolfsburg 3-1 with Mainz losing 2-1 to Freiburg and Hoffenheim lost 2-1 at home to Eintracht Frankfurt.

Unstoppable! This time it's a header and a brace for @Casemiro and @Lucasvazquez91 with the assist! #HalaMadridpic.twitter.com/hXiIpYolRg— Real Madrid C.F. 🇬🇧🇺🇸 (@realmadriden) January 18, 2020

In LaLiga, Casemiro scored twice to earn Real Madrid a 2-1 triumph over Sevilla and put them top.

The midfielder grabbed a second-half brace despite Luuk De Jong’s leveller in between.

De Jong had an opening first-half goal disallowed after a VAR review spotted Nemanja Gudelj fouling Eder Militao in the build up.

Real lead Barcelona by three points at the top but Barca host Granada on Sunday.

Atletico Madrid’s title hopes suffered a blow after they were beaten 2-0 at Eibar.

They are eight points adrift of their city rivals following goals from Esteban Burgos and Edu Exposito.

Simone Inzaghi’s side remain third, three points behind Juve and a point behind Inter Milan after an 11th straight league win.

Julian Chabot was sent off for Claudio Ranieri’s Sampdoria after Karol Linetty’s consolation.