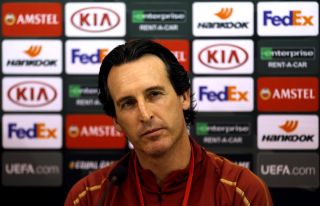 Unai Emery insists his Arsenal side are fully focused on the main prize ahead of their Europa League final against Chelsea in Baku.

The Premier League rivals are set to meet in Azerbaijan on Wednesday night to battle for the trophy and a place in next season’s Champions League.

The Gunners boss said: “We are focused on our final. We have a big challenge tomorrow.

We're working hard, giving everything to be ready for Wednesday 👊— Arsenal FC (@Arsenal) May 28, 2019

“We have two targets (including Champions League qualification) but for now we’re focused on winning a trophy.“

When asked whether Petr Cech would feature in his starting line-up, the 47-year-old would not be drawn into naming his side for the game.

On the retiring goalkeeper he added: “I respect him a lot. His career is amazing. First, like a person. Second, like a professional goalkeeper. I think he deserves the trust in him.“

Given the ticketing issues that have faced both clubs, there will be a limited number of fans in attendance.

Emery added: “We have battled our way here and want to show what we can do.

“Tomorrow there will be lots of support in England, across the world and also here in this amazing stadium – Arsenal and Chelsea are great teams, very well supported.

“We’re playing for our supporters whether they’re here or not.”