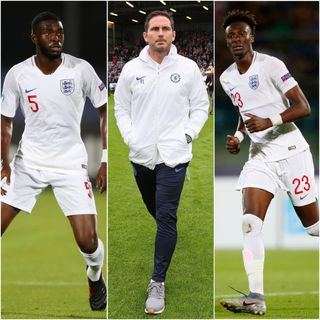 Abraham is the Premier League’s leading English goalscorer with seven, one behind Golden Boot pace-setter Sergio Aguero of Manchester City, while Tomori has been a regular in the Blues’ defence.

As the pair join club-mates Mason Mount and Ross Barkley in Gareth Southgate’s squad, the PA news agency looks at the increased influence of English players at Stamford Bridge and across the top flight.

All change at Chelsea

Last season, Chelsea gave the second-lowest percentage of playing time to players eligible for England of any Premier League club.

That has all changed this season, with the club’s transfer embargo a factor as new manager Frank Lampard looks closer to home.

Chelsea have already given 1,797 minutes of playing time to players eligible for England – it took them 32 games to reach that mark last season.

That is still the fifth-lowest mark in the Premier League, but marks a huge leap to 25.9 per cent of the club’s total playing time.

Abraham (seven), Mount (three) and Tomori also accounted for the club’s first 11 league goals this season, before N’Golo Kante ended that sequence in their defeat to Liverpool.

Across the Premier League as a whole, English players have accounted for 34.3 per cent of playing time this season – a slight increase on last season’s final total of 30.7 percent.

Southgate said at Thursday’s press conference to announce this month’s squad: “I’ve sat here for a couple of years and talked about opportunities for young English players.

“Percentage-wise it might be only a small shift this year, but that relates to three or four players and we know those players from junior teams.

“You don’t have to shift that dial too much to affect what’s possible for us as a national team.”

English is the most-represented nationality for every club bar one, with only Wolves’ extensive Portuguese contingent bucking the trend.

The Molineux club’s 16.1 per cent of playing time given to England-qualified players is also the lowest in the league, with Arsenal (18.7) and Manchester City (19.0) the only other clubs below 20 per cent.

Burnley lead the league with 75.9 per cent, 5,261 minutes out of 6,930, with only six non-English players featuring in Sean Dyche’s line-up this season and a seventh, Kevin Long, an unused substitute.

Sheffield United are at an even 50 per cent with five other clubs – Bournemouth, Brighton, Manchester United, Southampton and Watford – cracking the 40 per cent mark.

Leicester and West Ham, both flying high in the Premier League’s top five, have done so with England-eligible players accounting for 35.4 and 32.0 per cent of their respective playing time.