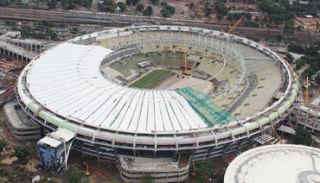 A test event scheduled for May 15 at the giant stadium, venue for the Confederations Cup in June and the 2014 World Cup finals, was cancelled by the Rio government on Tuesday.

When the venue was officially reopened at the end of April, four months behind schedule, it functioned at only 30 per cent of its capabilities, only two entrances were used and it still resembled a building site on the outside.

The high-profile June 2 match against England, when the stadium will be open to its new full capacity of 78,000 spectators, will therefore be the only test before it hosts three matches during the June 15-30 Confederations Cup.

The Rio government issued a statement saying that instead of the May 15 event, there would be a series of simulations of the facilities "to optimise the necessary tests, focusing on the technical aspect".

The Maracana, FIFA's main concern during delays in the building or modernisation of most of the World Cup stadiums, has had a complete overhaul costing 900 million reais ($448 million).

Workers are racing against the clock to meet the latest deadline of May 27 for the stadium to be delivered to world football governing body.