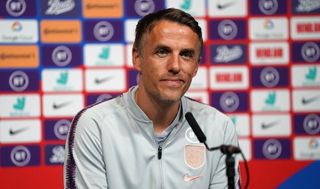 England coach Phil Neville has ordered his Lionesses to shrug off the rising weight of expectation ahead of their sold-out clash with Brazil at the Riverside Stadium.

Neville’s side endured a post-World Cup slump last month when they were forced to salvage a 3-3 draw with Belgium before surrendering the lead to lose to Norway.

With a Wembley clash against Germany fast approaching, followed by a host European Championships in 2021, Neville has acknowledged there will be no let-up in the level of external pressure.

More than 1️⃣0️⃣0️⃣,0️⃣0️⃣0️⃣ tickets have been sold in total for the @Lionesses' upcoming games at @Boro and @wembleystadium! https://t.co/HP75opDWMz— England (@England) October 1, 2019

Neville said: “The challenge for the players is that we’ve got the home Euros coming up and there’s going to be so much expectation on the players to win the competition.

“What you’ll see tomorrow and at Wembley in November is a team that now has to deal with that kind of expectation, and I think it’s a tremendous challenge and one we’re not going to hide from.

“It’s where we’ve wanted to be. Over the last 15 to 20 years for the players who have worked so hard to break down barriers, tomorrow is a big reward for them.”

Key to the continued women’s football revolution has been captain Steph Houghton, born less than 30 miles from the Riverside Stadium in Durham, who can recall the dark days when sold-out stadiums seemed simply a fantasy.

“When the likes of me and Jill Scott started at Sunderland we were 13 or 14 years old and we had to pay to play,” recalled Houghton.

“You’re having to get hand-me-down kits from the men’s side that are all extra-large.  I’ve seen every side of it in the last 10 to 15 years but I wouldn’t change any of it for the world.”

The Riverside clash will see the Football Association team up with the Darby Rimmer MND Foundation to raise awareness of motor neurone disease, following the diagnosis of Houghton’s husband Stephen Darby last year.

“As soon as Stephen was diagnosed his thought process was about how he could help others, and that’s why the Darby Rimmer MND Foundation was set up,” said Houghton.

“It’s been tough on a personal level but with the Foundation it gives us something important to focus on. We are trying to support as many people as we can over the next few years.”

Neville has endured injury concerns for the match with Fran Kirby and Abbie McManus forced to withdraw from the squad, but Jordan Nobbs is set to return after missing the World Cup with a knee injury.

For Neville, the importance of bouncing back with a good result against a Brazilian side which will include their superstar striker Marta is not to be understated.

“We need to produce performances over the next two games,” admitted Neville.

“The last camp was a strange one and there was an emotional hangover from the World Cup. Tomorrow is about the performance – we want to get that sparkle, that enjoyment and that freedom to play, and if we do that the result will look after itself.”