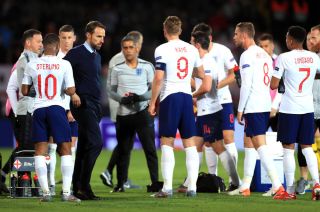 England are set to play their 2020 European Championships qualifying match against Bulgaria in front of a reduced crowd.

Bulgaria have been hit with a partial stadium closure by UEFA after their supporters were found guilty of racist behaviour in their matches against Kosovo and the Czech Republic last month.

The Bulgarian FA will be required to block off 5,000 seats for the visit of Gareth Southgate’s side to the Vasil Levski National Stadium on October 14. The arena has a capacity of 46,340.

The area of vacant seating will display a banner with the wording “#EqualGame”.

Montenegro were forced by UEFA to play a match behind closed doors after England players were subjected to racism in March.

England will head to Sofia for their next match at the top of Group A following two victories from their opening matches.

Bulgaria are rooted to the foot of the table having failed to win any of their four fixtures.