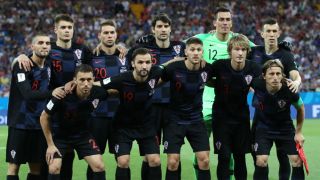 You might have heard of a few of those teams. Others will have passed you by. Don't worry, let's try a few more: Gent, Red Bull Salzburg, Hoffenheim, Dynamo Kiev, Bayer Leverkusen, Fiorentina, AC Milan, Juventus and Real Madrid.

Now we're talking. So, what's the connection? The first eight are the clubs who supplied the nine unused squad players for Croatia in their 2-1 semi-final loss to France after a heroic run to the last four of the World Cup in 1998.

The latter roll call, which includes the Scudetto holders and most recent Champions League winners, furnished Zlatko Dalic with the nine players he introduced to his starting XI against Iceland for a 2-1 victory in Rostov-on-Don on Tuesday.

The two men who kept their place from the sensational 3-0 win over mighty Argentina last time out, Luka Modric and Ivan Perisic, play for Real Madrid and Inter. I'm sure we didn't need to tell you that.

The depth available to the boss of the Vatreni is startling, and instructive of the strides made by Croatian players at elite level since their eye-catching first steps into the international arena as an independent nation at Euro 96 and again in France two years later.

Two decades have passed since Igor Stimac, Zvonimir Boban, Davor Suker and their team-mates fell agonisingly short of reaching the biggest stage of all.

Back then, a 1-0 loss to Argentina in their final group game in Bordeaux left them going through in second spot, and needing to plot a treacherous course past the Romania of Gheorghe Hagi and reigning European champions Germany, their quarter-final conquerors in England 24 months prior, to set up that titanic tussle with Les Bleus in Paris.

Fast forward to 2018, and the shoe was on the other foot, as Milan Badelj gleefully put it during Croatia's pre-match news conference, amid the heated complaints emanating from the Argentina and Nigeria camps over Dalic's plan to rest the players at risk of incurring a suspension were they to receive a second yellow card of the tournament against their combative familiar foes Iceland.

While Vedran Corluka, one of those on a booking, did take his place in the starting XI, it was ultimately worse than Jorge Sampaoli or Gernot Rohr had feared, with almost an entirely fresh team sheet submitted to FIFA by a side already guaranteed their berth in the round of 16.

It was their efficient opening win over Nigeria and subsequent crushing triumph at the expense of La Albiceleste and Lionel Messi that afforded Dalic the luxury of resting the majority of his key men going into the knockout stages. And yet, despite the array of new faces lining up against an Iceland side desperate to win, Croatia's reserves proved more than capable of finishing the group with an impressive 100 per cent record.

Expect to see the bigger names back from kick-off against Denmark in Nizhny Novgorod on Sunday, when Croatia will be hope to master the challenge posed by Christian Eriksen, before advancing to either a showdown with hosts Russia or, more probably, a reunion with Spain, who fell at their hands in the group stage of Euro 2016.

Orchestrate a repeat of that result and - hey presto - another World Cup semi-final beckons, 20 years on. But this time, the resources at the disposal of Dalic and his backroom staff appear luxurious in comparison to the uneven blend of world-class stars and willing reserves moulded into genuine contenders by former boss Miroslav Blazevic.

Only time - specifically a maximum of four winner-takes-all matches of the highest stakes imaginable - will tell if those famous checked shirts are infused with same magic a generation later.