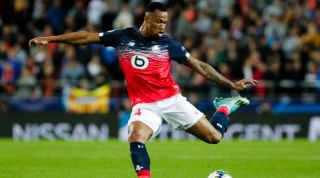 Everton have had a £30m offer accepted by Lille for defender Gabriel Magalhaes, reports Sky Sports.

Another unnamed English club and two Italian sides have also had bids accepted for the 22-year-old. Arsenal and Tottenham Hotspur had both been rumoured to be interested as well.

It is expected that a deal could be finalised in the next ten days, with Gabriel linking up with his new club ahead of next season.

That's despite the fact the Brazilian is under contract with Lille until 2023 and has previously pledged his commitment to the Ligue 1 side.

Signed for just £1.5m from Avai in his native Brazil in 2017, Gabriel's stock has since risen significantly over the past three years.

The centre-back is part of a group of talented youngsters who have developed under sporting director Luis Campos and head coach Christophe Galtier.

Another is Boubakary Soumare, who was linked with Chelsea and Manchester United in January, while the Blues were also interested in Victor Osimhen, along with Liverpool and Spurs.

Quiz! Can you name the last 100 penalty scorers in the Premier League?