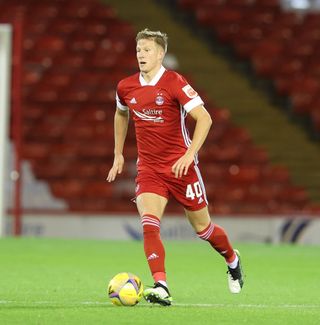 Aberdeen made it five straight wins in all competitions as Ross McCrorie’s goal earned them a 1-0 Ladbrokes Premiership victory at home to Kilmarnock as fans returned to Pittodrie on Saturday.

The impressive loan signing’s calm left-footed finish early on settled an even contest played in front of a small crowd, with Pittodrie one of two stadiums in the division hosting a test event for the safe return of spectators.

The visitors started brightly and enjoyed an early spell of pressure, but the hosts went in front after 16 minutes.

Goalkeeper Joe Lewis’ clearance was headed down by Jonny Hayes for Marley Watkins, who sent Scott Wright racing clear. The 23-year old played a neat ball back to the edge of the area, where McCrorie sent a first-time shot into the bottom right corner, giving the returning supporters early cause for celebration.

Kilmarnock responded and Lewis was called into action to turn Greg Kiltie’s effort round a post after 32 minutes, a save which triggered another spell of pressure from the visitors.

And Killie threatened again five minutes before the break when full-back Ross Millen dug out a cross from the right which forced Matty Kennedy to clear ahead of the onrushing Calum Waters.

The home side began to establish more control in the second half, although it took until the 63rd minute for either goalkeeper to be tested further, former Aberdeen man Danny Rogers pushing over a Hayes drive.

Wright should have doubled the home side’s lead in the 71st minute. Watkins played a superbly-weighted pass to send the midfielder through on goal, but, with the crowd ready to celebrate again, he contrived to curl his effort just the wrong side of a post.

Kilmarnock threatened a leveller moments later as substitutes Mitch Pinnock and Rory McKenzie combined, the latter seeing his effort turned over his own bar by the outstretched foot of Dons defender Scott McKenna.

The introduction of the two Kilmarnock attackers put the visitors on the front foot again and saw Aberdeen bolster their defence by bringing on Shay Logan and Ash Taylor to see the game out.

The Dons could have put the game beyond doubt late on.

Hayes popped up on the right to create space for a low shot from the corner of the area which Rogers tipped wide, while Tommie Hoban headed over in added time, but one goal proved enough.