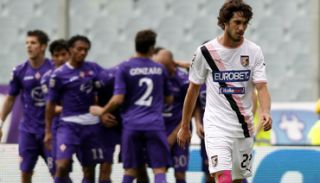 After briefly showing signs of life in the last few weeks, Palermo's nine-season spell in the top flight ended with a 1-0 defeat to a goal scored by one of their former players, Luca Toni, just before half-time.

Their hopes of saving the game floundered as torrential rain left huge puddles of water in the pitch in which the ball became stuck.

It was a sticky end to arguably one of the most chaotic seasons any Serie A team has ever suffered, yet, in the midst of it all, there were occasional moments of brilliance.

Midfielder Fabrizio Miccoli scored a stunning hat-trick against Chievo back in September, including a looping shot which he hooked into the goal from 40 metres.

Dybala, nicknamed 'the Jewel', shone occasionally, notably when he scored a brace at home to Sampdoria.

Palermo also produced one of the goals of the season, an individual Josip Ilcic effort worthy of Lionel Messi, in the return fixture against the Genoa side.

But the team with the distinctive pink shirts mainly made headlines thanks to the exploits of the explosive Zamparini, who hired and fired coaches almost on a whim.

There are varying estimates as to how many coaches Zamparini has fired since becoming club president in 2002, the numbers depending on what is considered an "interim" coach and complicated by the fact that he has sacked some coaches more than once. But there have been at least 25 victims.

The campaign started under Giuseppe Sannino, who was sacked after only three matches with Zamparini claiming his relationship with the squad had deteriorated.

Gian Piero Gasperini stepped in and lasted until February when he was given the chop after a defeat to Atalanta, although oddly he was not on the bench for that match because of suspension

Saying he would never forgive Gasperini for the Atalanta defeat, Zamparini brought in Alberto Malesani.

He lasted three matches before suffering a familiar fate. "We regret the decision considering that Alberto Malesani is an excellent person and an excellent coach," said a Palermo statement.

Bizarrely, Gasperini was brought back, but lasted only another two games.

"It would be mad if we managed to stay up at this point," said Zamparini.

He then reinstated Sannino and confessed: "I made a mistake in sacking Sannino. There is always time to repent and apologise."

Palermo suddenly burst into life with a five-match unbeaten run before successive defeats to Juventus, Udinese and Fiorentina sealed their fate.

"We will build a stronger Palermo. When you win you are the hero, when you don't your a loser."