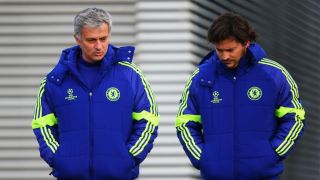 Club legend Ryan Giggs, who had served as number two under former boss Louis van Gaal, departed Old Trafford after 29 years of service when it became apparent he would not hold such a prominent role under Mourinho's stewardship.

As expected, the Portuguese has turned to trusted ally Faria to be his assistant, the 41-year-old having acted in the same capacity to Mourinho at Chelsea, Inter and Real Madrid.

United confirmed Faria's arrival on the club's official website and he is one of six new additions to United's backroom team.

Goalkeeping coach Silvino Louro has worked with Mourinho since his days at Porto and once again reunites with the 53-year-old at United.

Ricardo Formosinho, Carlos Lalin and Emilio Alvarez have all worked with Mourinho in the past and are part of the new backroom team, while Giovanni Cerra joins as an analyst.