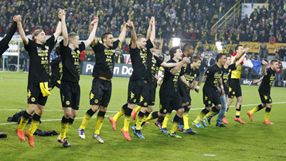 Dortmund won the title with two matches to spare after beating Borussia Monchengladbach 2-0 on Saturday, setting a league record after going 26 straight games without defeat.

They will complete a sparkling season next month if they beat Bayern Munich in the German Cup final in Berlin.

"Dortmund are worthy champions because the team has this commitment that fascinates even neutral observers. After winning the title in 2011 you never had the impression that they would take it a bit easier," said German football association (DFB) president Wolfgang Niersbach.

Dortmund, whose last defeat was back in September, also produced a near perfect second part to the season, winning 13 and drawing two in 15 games.

Thousands of fans poured onto the streets of the Ruhr valley city on Saturday to celebrate their title, honking car horns and spraying beer.

"I am very impressed by the unity of Borussia," Germany coach Joachim Low told reporters.

"Between coach team, officials and fans there is such a strong bond. The team played in this season with great intensity and will and were very consistent especially in the second half of the season."

"It is impressive how this young team won the title for the second straight time."

Dortmund, who have the second highest attendance in Europe with 80,000 fans per game behind Barcelona, refused to buckle in the title race, despite trailing Bayern at the halfway mark.

"It is their particular strength to get points against their biggest Bundesliga rivals," said Germany manager Oliver Bierhoff after Dortmund beat Bayern, third-placed Schalke 04 and Gladbach, in fourth, in consecutive league games in the last weeks.

"Bayern congratulates the team, the coach and the Borussia Dortmund officials for their title victory."

Low has at times been criticised for making limited use of Dortmund players in the past two years but he told Bild newspaper on Sunday this could change for the Euro 2012 this summer.

"There will surely be more than just [defender] Mats Hummels and [playmaker] Mario Gotze. I also do not rule out that there are even more Dortmund players in the starting XI."

Dortmund players Kevin Grosskreutz, Marcel Schmelzer, Sven Bender and Ilkay Guendogan - who have already won international caps - are in the running for a spot on Germany's Euro squad.