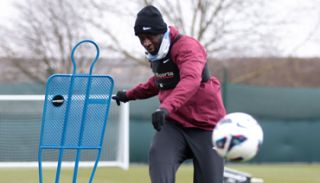 The Ivorian, who scored the only goal in City's 2011 Cup final triumph over Stoke City which ended the club's 35-year wait for silverware, missed the midweek victory over West Bromwich Albion after playing only 45 minutes of Saturday's draw against Swansea.

"Sometimes it is difficult to play all the games at the same level and to avoid injury," Toure was quoted as saying by the BBC on Thursday.

"But we have worked on ensuring I stay injury-free and concentrated on delivering at the weekend."

Toure has scored nine goals in all competitions this season with City set to finish runners-up to champions Manchester United in the Premier League.

"I am already fit. I started training three days ago and I am well in now," he added. "I want to deliver a good game and help the team to achieve something important."