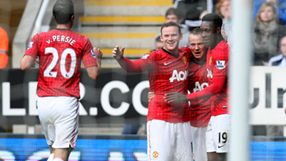 Manchester United's long-serving manager deployed Michael Carrick as the defensive base of his midfield quartet behind Shinji Kagawa and Tom Cleverley, with Wayne Rooney at the top of the diamond supplying a stream of passes for strikers Robin van Persie and Danny Welbeck.

"We tried this shape in midweek for the 2-1 Champions League win over CFR Cluj and for our victory over Newcastle in the League Cup last month," Ferguson told Sky Sports television.

"It offers different options for us. We are renowned for our use of wide players but we played so well on Tuesday against a decent team in Cluj that I wanted to see how far we could go with the diamond system."

It worked so well on Sunday that Ferguson described it as Manchester United's best performance of the season.

"It was a great result," said the Scot after his team climbed to second in the Premier League table, four points behind leaders Chelsea.

"Against a very powerful and aggressive Newcastle team you have to really perform and make sure you take control of the game," Ferguson added. "I think we did that most of the time and our football was good.

"For the whole time we were really at the top of our game. Our concentration and determination, the things you really want to see in your team, was good."

Manchester United had already lost twice this season and defeat at Newcastle would have meant it was the first time they had lost three of their first seven games in a Premier League campaign.

Rooney returned from a one-month injury layoff for the 2-1 League Cup win over Newcastle 10 days ago and the England international looked back to his best on Sunday.

"I think he's getting fitter all the time," said Ferguson. "I took him with off with about 20 minutes to go because I could see signs he was getting a little tired.

"He put so much work in today but his football was terrific."

Manchester United suffered a 3-0 mauling at Newcastle in the Premier League in January and Rooney said he was delighted to avenge that defeat.

"Everyone knows this is probably one of the hardest places to come to all season but we defended brilliantly and fully deserved our victory," he explained.

"In the first six games of the season we haven't defended well enough, not just the back four but the whole team, and today we were brilliant against a physical side."