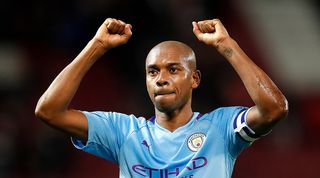 Fernandinho is set to extend his stay at Manchester City by signing a new contract, the player himself has revealed.

The Brazil international's current deal expires at the end of June but he is keen to put pen to paper on fresh terms.

Pep Guardiola told reporters on Tuesday that he wants to see the former Shakhtar Donetsk man remain at the Etihad Stadium.

And Fernandinho, who has been deployed in defence for much of this season due to City's injury problems, has confirmed that an extension could be triggered soon.

"When I renewed at the end of 2018, we put in a clause that if I reached certain goals, my contract would be renewed automatically," he told ESPN Brasil.

“Conversations have already started, we talked about it last month. I am close to reaching those goals and renewing the contract, but we can only confirm it after signing.

“The club have already shown interest in me staying, I have also shown my interest in staying.”

"It is good as long as you can be at the highest level,” the midfielder said of playing in the backline. “Playing in a different position opens up the range of learning.

“In defence, I see the game in a different way. It has been very cool and the guidance I have received from Pep has been very good.

“At 34, playing in the Premier League is a source of pride. Many, many players wanted to be experiencing what I am experiencing.”

Fernandinho starred in City's comfortable 3-1 victory over Manchester United in the first leg of their League Cup semi-final on Tuesday night.

Guardiola's side return to Premier League action against Aston Villa this weekend, although their chances of retaining the title are slim thanks to Liverpool's 14-point advantage over the reigning champions.