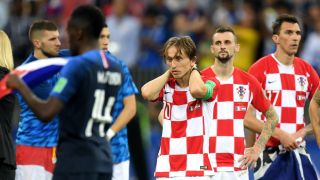 Croatia's run to the World Cup final was a sensational achievement given their regular brushes with turmoil, but the 4-2 defeat to France surely ends something of a 'golden generation' for the nation.

Zlatko Dalic's men are not a surprise package because of the players thay have available, or the small size of their population. No, their charge to Moscow was a shock because of what they have been through in the last year.

On October 7 in 2017, the Croatian Football Federation (HNS) decided to take drastic decision, sacking coach Ante Cacic following a 1-1 draw with Finland, leaving the team in a tense position with just one group game remaining in qualifying.

"Zlatko will lead the team in the crucial game against Ukraine and we are hoping for a positive outcome," HNS president Davor Suker said at the time, in something of an understatement.

At the end of their disappointing draw with Finland, captain Luka Modric appeared on the verge of tears, trudging off with head in hands while pondering the possibility of missing out on the World Cup entirely.

Luckily for Croatia, an Andrej Kramaric double in Dalic's first game in charge secured second place in Group I, and a 4-1 aggregate play-off win over Greece followed, as the new coach succeeded with the minimum expectation of getting the team out of jail and into the World Cup.

Congratulations to / as they win their second world title - Félicitations! July 15, 2018

Yet things failed to run smoothly once they arrived on Russian soil, as Nikola Kalinic was sent home. Although the official reasoning was an injury, reports suggested the striker was actually disciplined for a poor reaction to not playing in his side's opener against Nigeria.

It's also worth remembering that Modric and Dejan Lovren – arguably their most important players in Russia – have endured a lot off the pitch in the last year.

Both players have been drawn into the corruption case of former Dinamo Zagreb chief Zdravko Mamic, who was found guilty of taking shares of transfer fees while in charge of Croatia's most famous club and sentenced to six and a half years in prison.

Modric and Lovren face perjury charges themselves after they allegedly gave "false testimony" in the case, with the former's reputation at home nosediving as a result.

There have been no signs of such issues causing distraction, however, with both players performing admirably. Given the furore that has swirled around them in the year before the tournament, it is quite remarkable how much of an impact Croatia have made on the World Cup.

The result of Sunday's final is a harsh reflection of the game, too. Croatia were, for much of the 90 minutes, significantly more threatening in attack than France, while they were also dominant in midfield.

In a World Cup which has been characterised by an enthralling and charming chaos, on the pitch Croatia have been structured, organised and generally well-drilled, traits that have rarely – their quarter-final slog with hosts Russia aside – impacted negatively on the entertainment they've whipped up.

Modrid - as is often the case - has been their key cog, the same man who was so visibly shaken on the pitch against Finland last October often running the show, his performances leading to calls for him to be considered for the Ballon d'Or to add to the Golden Ball gong he received after the final.

Again in Moscow on Sunday, he was a cool and calm presence, albeit Croatia ran into probably the one team at the World Cup who have looked more solid than them.

There can be no getting away from the fact the VAR decision for France's penalty – from which Antoine Griezmann made it 2-1 to the eventual champions – had an impact.

Croatia's show of character was admirable in the second half, as they poured men forward before the expected rain finally arrived, but it was little surprise France's gifted side ultimately picked them off.

For Croatia, getting to the final is a triumph in itself. Despite their undoubted star quality, few would have predicted them to get so far given their rather tumultuous backstories.

But at the same time, Croatia my not have such an opportunity again for a generation.

Modric, Ivan Rakitic, Mario Mandzukic, Ivan Perisic and Lovren are all 29 or older, meaning another World Cup showing could be beyond the realms of possibility for 2022.

Reaching the 2018 final is still an almighty achievement for a Croatia squad who defied the chaos surrounding them to punch above their weight.